Tips for Getting a Good Night’s Sleep

For years I slept on an uncomfortable mattress and a fairly unforgiving pillow. Being rather British, I simply put up with it, thinking myself lucky to have a bed at all. As I was also living away from home for the first time, I swept the problem into the general bracket of ‘Things which annoy me but which I cannot afford to change’. Paying for bills and, most importantly, food, seemed rather more important at the time! 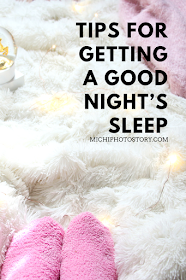 However, when I hurt my back at work, I had to sit down and reconsider how I was living my life. Often I would dash about like a mad woman and lift things that were probably far too heavy for me. It was only after a trip to the chiropractor that I realized I needed to do something about the bed in particular, as it turned out my back and neck were slowly moving out of line.

So, out went the old bed frame which, we discovered, had a crack in one of the slats. We bought a much sturdier frame and we invested in an Air Foam mattress, specifically designed to support your spine. To be honest, I started to feel the difference almost straight away. The problem was where I had once been waking up with a sore back, now it was my neck which hurt instead!

My other half hadn’t thought that we would need to change the pillows as well, but I begged to differ. I thought it was about time that we got some lovely soft pillows, so I took matters into my own hands. Knowing absolutely nothing about which pillows are best to sleep on, I headed on to my iPad.

A little internet research proved fruitful, as I realized the benefits of natural down pillows. These pillows are made of feathers or down from geese and ducks. They form a curve of your neck and head so they can provide really tailored support. As they are made of a natural material, natural pillows can be re-cased and rejuvenated so they will last for long. Down pillows also ‘breathe’ easily, which means that you will have a comfortable flow of air around your head and neck at night. Plus they’re really soft and cuddly!

My friend had recommended cushy.co.uk for pillows, so I went online and had a look. All the pillows looked rather enticing, but in the end, we opted for a pair of Surrey Down - Goose Feather & Down Pillows. They arrived in no time at all and I slept better straight away once we had made this last change.

In the future, I think we would always opt for natural filled pillows, as they seem to have so many benefits. It is such a relief to be able to sleep properly, and not to worry about waking up everyday with aches and pains. Being comfy and cozy at night can, it seems, make all the difference to how you feel throughout the day!