First Communion of my Son

Nowadays, interfaith marriage is very common so I know that I’m not the only one who belongs to mixed marriages. When I say mixed marriage, it means that the husband and wife have different religions or beliefs. I’m a Born Again Christian and my husband is a Catholic, we may have different beliefs but it was never an issue in our marriage. We don’t convince, persuade or force each other to convert. We do respect our own choices, beliefs, and values.

I was also a product of mixed marriages, my father is Protestant and my mother is a Born Again Christian and as we grow old we chose our own beliefs. So when it comes to my son, I give him the freedom to choose. As long as we believe in one God and we know that religion alone will not save us. But of course, I would be happy if we have the same belief.
Since last month, my son was preparing for his first communion, he was baptized in the Catholic church and also studying in Catholic School. Two weeks ago, he told that non-communicants are on vacation already. 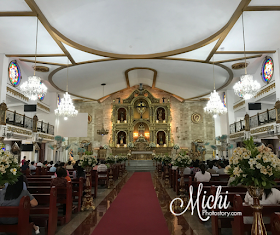 The day before his communion, my son was asking me if I’m excited. 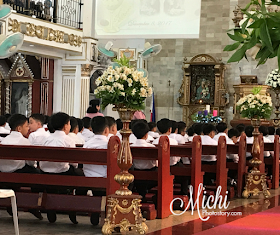 Fast forward to communion, we picked up my in-laws, and off we went to church. Sa sobrang aga namin, nakadalawang mass pa kami. lol! It was my first time witnessing communion. After communion, we went straight to Nina’s Kitchen to celebrate.
Michi
Share