15 Activities in One Day at Kidzania Manila

Update: I've read from CNN Philippines article last July 22 that Kidzanila Manila is closing down by end of August 31, 2020 after months of shutdown due to the COVID-19 pandemic.

Since last year my son wanted to go back to Kidzania, if you are a regular reader of this blog, you know that I give a reward if he did well in school. But I’m not fond of giving stuff, I rather pay for experience so Kidzania is a good prize for having a gold eagle seal and being part of the top 10 in school. But my son always changed his mind, he will choose “one week of gadget use” over Kidzania so nakatipid ako sa reward niya. Hehehe! 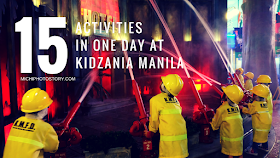 But when I learned that he will receive a Gold Eagle Certificate this school year, I already included Kidzania Manila in our itinerary this summer. He deserved this treat so after getting his school card last week, off we went to Kidzania. This is our third visit, so you can check my old posts about it.

Buzzer Beater lang kami, magstart pa lang when we entered the theme park. They don’t give out maps na, you have to get it at Tourist Information Desk. Since we have Kidzos, we did not encash the check yet and fell in line at Fire Station. Kids will learn about fire safety and if you are lucky you will put out fire. This was the first activity that my son did during our first visit, but he wanted to repeat the 1. Fireman job for stamp. The staff informed us that we only need 5 stamps and we can already upgrade his Citizen Pazzport. Yey!

Tip: If this is your first time going to Kidzania, if you see long lines at the bank. Don’t waste your time falling in line, go immediately to different establishments and look for Census Plaque, you will know whether you are going to pay or earn kidzos. Encash your check once you run out of money or if no more long queues. 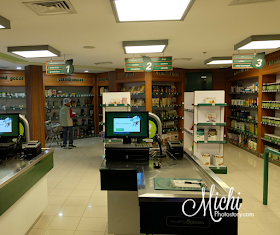 Second job is at the Healthy Options supermarket, I love visiting Kidzania on weekdays and as much as possible before opening pa lang nandun na kami so we can maximize our time. It is easy for me to take pictures and videos too, kasi wala ko kaagaw sa space. Anyway, I think his job is 2. Supermarket Supervisor, where he returned all the groceries to the correct shelves. He was having a hard time, looking and organizing the groceries. 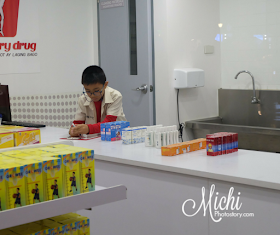 Third job is at Mercury Drug, again he was alone so he did all the 3. Pharmacist tasks. He manages and stock inventory. The job is similar with his previous job at the supermarket. After this, we immediately went to City Tour Bus so he can work as a Tour Guide or Tour Bus Inspector but we were 2 minutes late, so they did not allow us. But we paid 1 kidzos each so we can ride the tour bus, 4. City Tour Bus Passenger. I recommend that you ride this bus because you will appreciate more the things that you see inside the theme park. Points of Interest: The League of RightZ, Kidzania Tiangge, Eternal Spirit and Entrance to Driving Streets 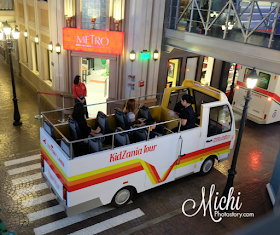 After our tour, my son went to the bank. He was supposed to encash the check, but a staff approached us and he was invited to work in the Courthouse and he said yes. I was surprised that he wants to work here. They really need 5 Kids for the Trial Case so we waited for few minutes bago nabuo. My son works as a 5. Judge and I was able to watch the trial case too. 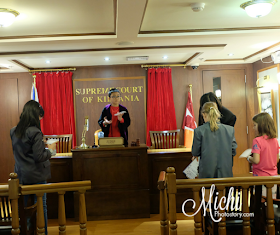 We he went out, I suggested the Radio Station and he agreed. At that moment, I was happy because he was trying jobs that he didn’t like before. After few minutes, the staff went out and she asked me to join the 6. DJ job. She said, guardians can join so sayang naman, then she asked me to sign a waiver because they will record our experience. So you will get a free CD for your souvenir. Not bad di ba? After doing this job, I realized mahirap pala magDJ kahit may script pa ha. 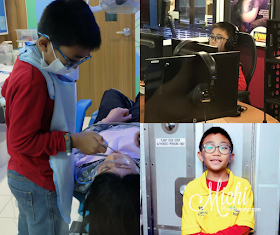 I was convincing my son to try Hospital jobs but he was not interested so he ended up working at Dental Clinic. 7. Dentist for his 7th job. Then we went up so he can try jobs on the second floor. He worked at Cebu Pacific Air, this time as a 8. Cabin Crew. Now he realized that it is not easy to push the cart and serve passengers. 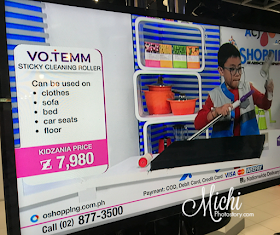 My son likes watching Home TV Shopping which I don’t understand why, hindi naman siya bumibili. So I told him, try mo kaya sa Home TV shopping which he did kaso he can’t work without companion. They need at least two persons, 9. one for host and one for demonstrator. And because we don’t want to waste any minute, I joined this Home TV Shopping job. I signed a waiver and I downloaded our video after 24 hours. This is not an easy job too, ang hirap magbasa ng script sa malayo. 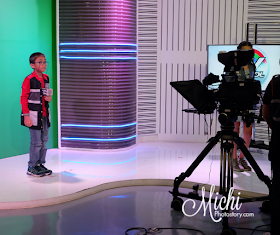 Then itodo na natin ang mga video souvenir, my son worked at TV Station as a 10. Field Reporter. Since there are only two kids at that time, he became Ronda Patroller, Fun Patroller, and Weather Patroller. You can claim your CD after 30 minutes. 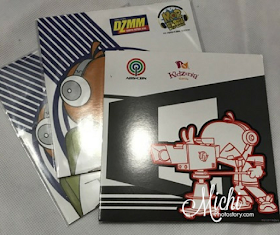 We went down to look for other jobs and we saw 11. Pit Crew Training Center. They will teach you how to replace tires of Super Formula Car, you have three chances to beat the Top 10. But my son did not make it because the tires are too heavy for him, so the fastest time that he finished the job was 21 seconds. 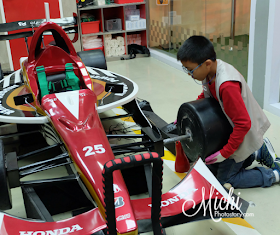 Beside the Pit Crew Training Center was the McDonald Burger Shop, though he already experience making a burger when he joined the McDonald’s Kiddie Crew, he still joined this 12. Burger Making Activity at sayang din naman ang free burger. 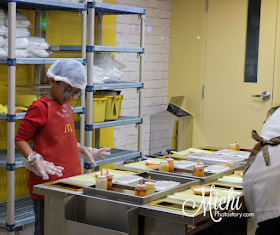 Then we move to the Climbing Building, my son wanted to try this activity and I was really surprised because as far as I know, ayaw niya ng mga physical activity na ganyan. Pero sabi niya e, so we fell in line. The staff checked his Pazzport and she said, over-over na daw kami sa stamps so magpa-upgrade na daw kami. My son said, after the activity na lang but the staff informed us na sayang daw ang stamps, hindi daw pwede itransfer yun. So we went to the Immigration to upgrade the Pazzport. 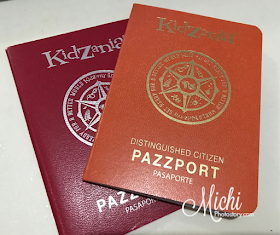 Tip: Don’t forget to count your stamps, once you reach 30 Stamps, you can upgrade your Citizen Pazzport to Distinguished Citizen for FREE. We lost count sa kakapila namin, sayang tuloy yung discounts and 7 stamps na sobra naming sa old Pazzport. So we need 60 stamps to level up.

10 Kidzo discount on redemption items at the Department Store
10% discount on National Store & PiKZ Station
4 extra Kidzos per activity
They get more activities or better roles in certain activities.
Get exclusive invites to Kidzania special events
Free parent beverage at the Parent’s Lounge

I forgot to claim my FREE beverage but I was able to get discount when I bought my son's picture during our last visit.

After getting the new Pazzport, we went back to Climbing Building but the line was long so I told my son to go to Art & Design Company. He doesn’t like my idea but I told him sayang ang 15 minutes mo na paghihintay, mag paint ka na lang, 15 minutes din. So he followed my suggestion and painted with the preschoolers 13. Making and Art Activity. Hehehe! 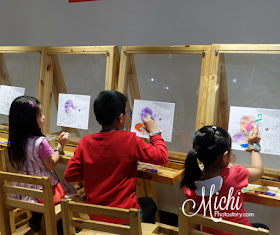 After that, he went back to Climbing Building. Since he had the orange pazzport, he can do the activity twice, 14. Cableman. It is one of the benefits but he was not able to use it because he gave up, he was not able to reach the top, nalula na siya. Hehehe! 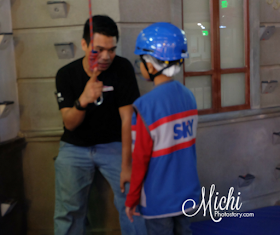 Lastly, we went back to City Tour Bus and finally, we were on time so he worked as 15. Tour Bus Inspector. This is also a nice job because you will sit beside the driver and you will tour the theme park. And dahil umikot pa sila sa Kidzania, na-late kami sa Marine Research Lab so next time na lang. 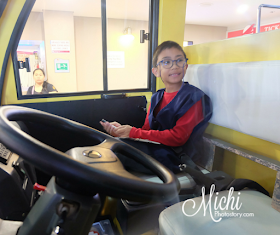 My son opened ATM and deposited all his money so Cashless na kami next time. Though may natira pa kami na hindi naisama sa deposit. They have a promo of Unlipazz starting April 1, I'm contemplating if we will grab the promo. 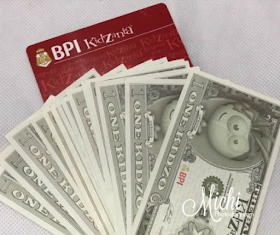 
* This post contains affiliate link/s. If you decide to make a purchase, I will earn a commission at no additional cost to you. Thank you for your support.
Michi
Share