I’ve been seeing the word Decathlon in different social media but I did not mind it because I’m not into sports so feeling ko, marathon or fun run ito, magkarhyme e. hehehe! But last Thursday, my friend asked me if I’ve been to Decathlon in Festival Mall.

I said “No, hindi naman ko mahilig sa sports so baka wala ko mabili”. She said, try mo ang dami mura and she mentioned the stuff that they bought in Decathlon. She said that the store is big but according to her brother, x3 daw nun ang Decathlon sa Singapore.

Out of curiosity, I searched for it. According to Wikipedia, Decathlon is one of the largest sporting goods retailers which founded by Michel Leclercq in Lille, France. It started its first store in 1976 and now there are more than 1100 stores around the world. So far there is only one store in the Phillippines and it is located in Festival Mall, Alabang, Muntinlupa. Wow, ang tagal na pala and wala ko kamalay-malay. 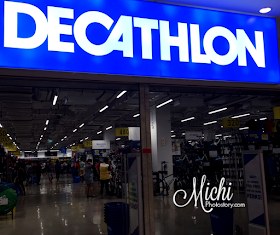 Last Sunday, on our way to Alabang, I informed my husband about Decathlon so before we went to the grocery, we paid a visit to the store. And we were surprised na ang laki nga niya and the price is really affordable. 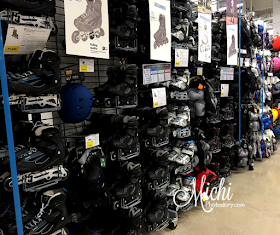 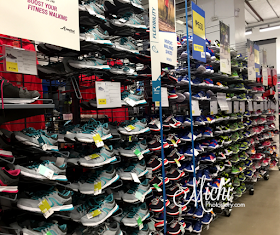 I even saw a friend there and sabi ko talaga, “napadpad ka dito sa South”. He said “dumadayo talaga kami dito sa Decathlon”. Well, if you are really into sports, you will appreciate Decathlon because your money can go along way. You can buy a shirt for as low as P199. 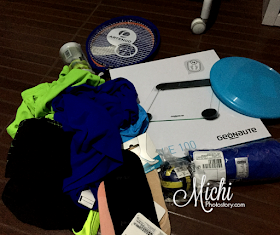 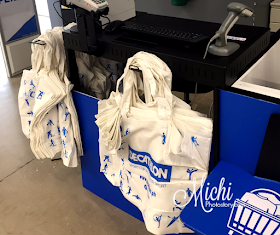 If you want to become a member, just register and it is FREE. You can also get a one-time reusable bag for free or buy it for P50. I don't know yet, what are the benefits of being a member. Have you been to Decathlon?

My aunt was looking for shirts (big sizes) and I recommend Decathlon baka may makita siya na malaking size. So after my mom bought pants at Landmark, off we went to the store. At the counter, out of the blue, my mom asked me kung nasan na daw yung bitbit niya. What! I remembered na umupo siya in one of the benches in Decathlon store. So I guess, nung tumayo siya naiwan niya yung shopping bag.

We checked the whole store and one staff also helped us in checking each aisle then she referred us to one of the staff. The guy went to their office to check their LOST AND FOUND, but unfortunately, no one returned the shopping bag. I asked for CCTV footage so we can see who took the shopping bag but the guy replied na hindi naman daw nakafocus dun yung CCTV. Lesson learned, be alert. Nafood coma yata nanay ko after magbuffet sa All4U at bigla nakalimutan na may bitbit siya. Goodbye pants!